The Power of Thank You 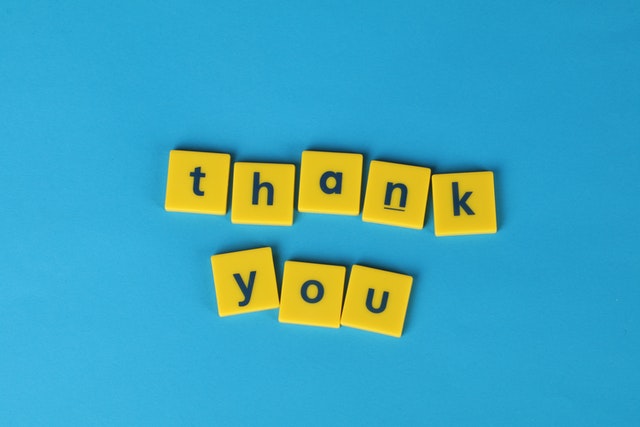 Have you ever worked for a company where a complaint is that the management never says “thank you”?

The lack of thank you to hard working employees can become a point of unhappiness.   Sure, they are hired for the task, or perhaps volunteer for the task,  but oftentimes good workers will do more than they are paid for, will stand in the gap when someone is sick, or will go the extra mile when needed.

Sometimes they would appreciate a simple thank you.

That is true in families as well.

The lack of thank you can be destructive.  The Bible tells us that Lucifer, instead of being thankful to God for the gifts and position he had been given, became jealous and wanted to take God’s place.  For that pride and rebellion, he was thrown out of heaven.

Isaiah 14:12 How art thou fallen from heaven, O Lucifer, son of the morning! how art thou cut down to the ground, which didst weaken the nations!

13 For thou hast said in thine heart, I will ascend into heaven, I will exalt my throne above the stars of God: I will sit also upon the mount of the congregation, in the sides of the north:

14 I will ascend above the heights of the clouds; I will be like the most High.

15 Yet thou shalt be brought down to hell, to the sides of the pit.

The power of thank you is huge.

Everyone has tasks to do.

A thank you seems to lift the load.

When a child tells you thank you, don’t you want to do more for the child?  Your effort, your work, is appreciated.

Jesus once spoke about the lack of thanksgiving.

Luke 17:11 As he was on his way to Jerusalem, he was passing along the borders of Samaria and Galilee. 12 As he entered into a certain village, ten men who were lepers met him, who stood at a distance. 13 They lifted up their voices, saying, “Jesus, Master, have mercy on us!”

14 When he saw them, he said to them, “Go and show yourselves to the priests.” As they went, they were cleansed. 15 One of them, when he saw that he was healed, turned back, glorifying God with a loud voice. 16 He fell on his face at Jesus’ feet, giving him thanks; and he was a Samaritan. 17 Jesus answered, “Weren’t the ten cleansed? But where are the nine? 18 Were there none found who returned to give glory to God, except this foreigner?” 19 Then he said to him, “Get up, and go your way. Your faith has healed you.”

Psalm 107:1  O give thanks unto the Lord, for he is good: for his mercy endureth for ever.

2 Let the redeemed of the Lord say so, whom he hath redeemed from the hand of the enemy;

4 They wandered in the wilderness in a solitary way; they found no city to dwell in.

5 Hungry and thirsty, their soul fainted in them.

6 Then they cried unto the Lord in their trouble, and he delivered them out of their distresses.

7 And he led them forth by the right way, that they might go to a city of habitation.

8 Oh that men would praise the Lord for his goodness, and for his wonderful works to the children of men!

9 For he satisfieth the longing soul, and filleth the hungry soul with goodness.

10 Such as sit in darkness and in the shadow of death, being bound in affliction and iron;

11 Because they rebelled against the words of God, and contemned the counsel of the most High:

12 Therefore he brought down their heart with labour; they fell down, and there was none to help.

13 Then they cried unto the Lord in their trouble, and he saved them out of their distresses.

14 He brought them out of darkness and the shadow of death, and brake their bands in sunder.

15 Oh that men would praise the Lord for his goodness, and for his wonderful works to the children of men!

16 For he hath broken the gates of brass, and cut the bars of iron in sunder.

18 Their soul abhorreth all manner of meat; and they draw near unto the gates of death.

19 Then they cry unto the Lord in their trouble, and he saveth them out of their distresses.

20 He sent his word, and healed them, and delivered them from their destructions.

21 Oh that men would praise the Lord for his goodness, and for his wonderful works to the children of men!

22 And let them sacrifice the sacrifices of thanksgiving, and declare his works with rejoicing.

23 They that go down to the sea in ships, that do business in great waters;

24 These see the works of the Lord, and his wonders in the deep.

25 For he commandeth, and raiseth the stormy wind, which lifteth up the waves thereof.

26 They mount up to the heaven, they go down again to the depths: their soul is melted because of trouble.

27 They reel to and fro, and stagger like a drunken man, and are at their wit’s end.

28 Then they cry unto the Lord in their trouble, and he bringeth them out of their distresses.

29 He maketh the storm a calm, so that the waves thereof are still.

30 Then are they glad because they be quiet; so he bringeth them unto their desired haven.

31 Oh that men would praise the Lord for his goodness, and for his wonderful works to the children of men!

32 Let them exalt him also in the congregation of the people, and praise him in the assembly of the elders.

33 He turneth rivers into a wilderness, and the watersprings into dry ground;

34 A fruitful land into barrenness, for the wickedness of them that dwell therein.

35 He turneth the wilderness into a standing water, and dry ground into watersprings.

36 And there he maketh the hungry to dwell, that they may prepare a city for habitation;

37 And sow the fields, and plant vineyards, which may yield fruits of increase.

38 He blesseth them also, so that they are multiplied greatly; and suffereth not their cattle to decrease.

39 Again, they are minished and brought low through oppression, affliction, and sorrow.

40 He poureth contempt upon princes, and causeth them to wander in the wilderness, where there is no way.

41 Yet setteth he the poor on high from affliction, and maketh him families like a flock.

42 The righteous shall see it, and rejoice: and all iniquity shall stop her mouth.

43 Whoso is wise, and will observe these things, even they shall understand the lovingkindness of the Lord.