Lay the Ax to the Root 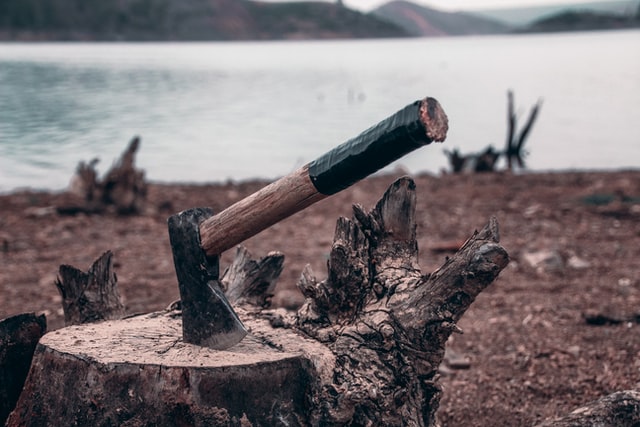 Matthew 3:10 Even now the ax lies at the root of the trees. Therefore every tree that doesn’t produce good fruit is cut down, and cast into the fire.

To deal with a situation, you must lay the ax to the root.

When you are pulling a weed, you want to pull up the root. If you leave the root, the weed can grow again.

Likewise, when you are praying, you want to lay the ax to the root of the problem.

How do you do that?

The Bible teaches about prayer.

There are different forms of prayer.

You can also learn about prayer from teachers or preachers who have gathered the scriptures or examples together in a book or sermon.

God will do nothing without prayer.

Psalm 115:16  The heavens are Yahweh’s heavens,
but he has given the earth to the children of men.

God gave the earth to Adam and told him to have dominion.

Genesis 1:28   God blessed them. God said to them, “Be fruitful, multiply, fill the earth, and subdue it. Have dominion over the fish of the sea, over the birds of the sky, and over every living thing that moves on the earth.”

Because of free will, God will not interfere with that dominion.  Through Jesus Christ, the Lord has restored the “tools” so to speak, to deal with things on the earth…the Name of Jesus, the Blood of Jesus, the promises of God.

James 1:5    But if any of you lacks wisdom, let him ask of God, who gives to all liberally and without reproach, and it will be given to him. 6 But let him ask in faith, without any doubting, for he who doubts is like a wave of the sea, driven by the wind and tossed. 7 For that man shouldn’t think that he will receive anything from the Lord. 8 He is a double-minded man, unstable in all his ways.

James 4:2  You lust, and don’t have. You murder and covet, and can’t obtain. You fight and make war. You don’t have, because you don’t ask.

Mark 16:20   They went out, and preached everywhere, the Lord working with them, and confirming the word by the signs that followed. Amen.

And if you will read through the Bible, you will find that principle.  Man acts first in obedience to God’s Word, then it is seen “the Lord working with them”.

Elijah built an altar…and the fire of God came down

As you read recorded history in the Bible, you will see this principle.  Man acted first and then God acted.

When it was time for Jesus to come to earth, the angel was sent to ask the free will permission of Mary.

Luke 1: 26  Now in the sixth month, the angel Gabriel was sent from God to a city of Galilee named Nazareth, 27 to a virgin pledged to be married to a man whose name was Joseph, of David’s house. The virgin’s name was Mary. 28 Having come in, the angel said to her, “Rejoice, you highly favored one! The Lord is with you. Blessed are you among women!”

29 But when she saw him, she was greatly troubled at the saying, and considered what kind of salutation this might be. 30 The angel said to her, “Don’t be afraid, Mary, for you have found favor with God. 31 Behold, you will conceive in your womb and give birth to a son, and shall name him ‘Jesus.’ 32 He will be great and will be called the Son of the Most High. The Lord God will give him the throne of his father David, 33 and he will reign over the house of Jacob forever. There will be no end to his Kingdom.”

35 The angel answered her, “The Holy Spirit will come on you, and the power of the Most High will overshadow you. Therefore also the holy one who is born from you will be called the Son of God. 36 Behold, Elizabeth your relative also has conceived a son in her old age; and this is the sixth month with her who was called barren. 37 For nothing spoken by God is impossible.”

38 Mary said, “Behold, the servant of the Lord; let it be done to me according to your word.”

Then the angel departed from her.

Spending time learning what the Bible says about prayer in all its different forms is time well spent.

The Prince of this World Cometh and Hath Nothing in Me

Near Death Experiences vs Achievements and Accomplishments